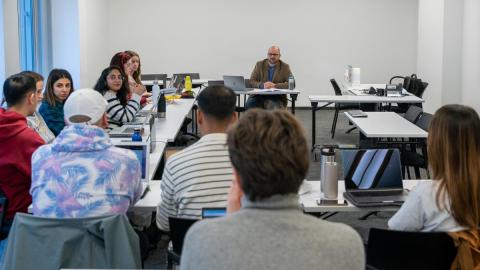 As part of “Journalistic research and investigation”, a practical course conducted by Marius Dragomir at CEU, a team of 12 CEU students launched work on a new investigation in January 2023. The class is run in a newsroom format, students carrying out journalistic investigation and research that will feed into a final report.

The course is aimed to familiarize students with various techniques used in journalistic investigations. “This course doesn’t prepare students to become journalists, but its aim is to give them a taste of what journalism is all about,” Dragomir said. “Whatever job students will land in their careers, knowing how to deal with media and journalists will be important. In my view, the best way to learn that is by doing it.”

The students in Dragomir’s class will spend the current winter term collecting data and information from various sources, databases, expert reports, and other sources of information, and conducting interviews, to gather material for a journalistic report that will be then pitched to a major journalistic outlet. In 2021, the story documented in Dragomir’s class, an investigation into the illegal practices in detention centers across Europe, appeared in Politico, attracting a large audience and interest from policymakers. The investigation launched with the 2022 class, on a highly sensitive topic, is still being checked and edited. The 2023 class is eying an equally relevant topic, which will be revealed once the story comes out.