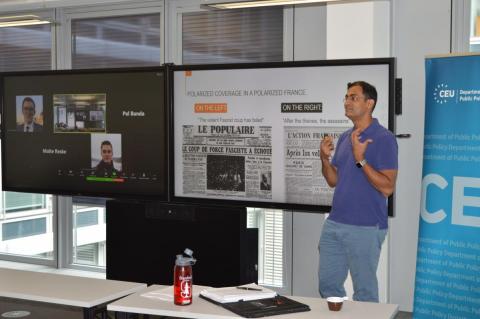 Saumitra Jha (Stanford Graduate School of Business) gave a lecture as part of the DPP Evidence-based Policymaking Seminar Series titled Heroes and Villains: The Effects of Heroism on Autocratic Values and Nazi Collaboration in France .

With his coauthors, he brings to light the role of historical networks in diffusing extreme political behaviors. They take the case of a network of war veterans (heroes) formed while serving under the military officer Philippe Petain in World War I. These networks espoused Petain's authoritarian political views during the Petain-led Vichy regime (1940-44) long after they directly served under him in the Battle of Verdun in 1916. Jha and his team unearth granular historical data on the locations of these network members to provide evidence that the bond Petain created with those who served under him remained strong two decades later; this network legitimized and diffused autocratic values in their regions. In July 1940, France, one of the most durable democracies, one that survived pandemic and a world war, turned to dictatorship under the Vichy regime. The paper examines several questions for understanding the threats to democracies today: Under what conditions do democratic values erode and previously durable democratic institutions falter? To what extent can heroes legitimize otherwise repugnant and extreme political preferences? What role do hierarchical networks forged by shared heroism play in propagating the values of their leaders?