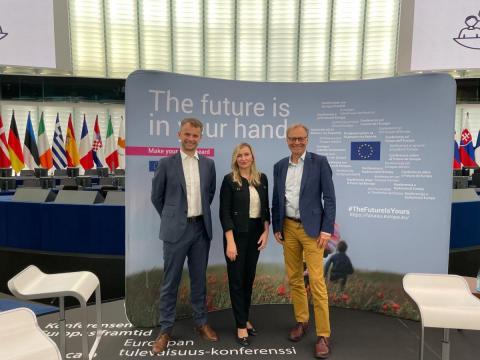 The Conference on the Future of Europe is a joint flagship project of the European Commission, the European Council and the European Parliament. It is based on open consultations among randomly selected European citizens from all EU countries. Citizens assemblies with 200 participants each are organized along thematic issues. Over a period of six month the same 200 participants, of which one third is below age 26, organize themselves in smaller working groups and meet online to discuss the thematic issue which was allocated to them. At the end of this consultation they reconvene for a plenary session in 2022 to come up with proposals.

Rainer Münz participated in the kick-off meeting of the workstream on Migration which took place on Oct. 14-16, 2021 in the plenary hall of the European Parliament in Strasburg. He made a short presentation on the number of migrants and refugees arriving and residing in Europe. For the rest of the time, he served as a resource person answering questions raised during the breakout sessions of the working groups.