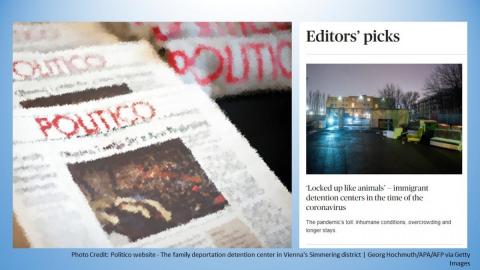 In an example of academia's contribution to journalism, Politico features an article by Department of Public Policy’s masters students written under the editorship of CMDS Director Marius Dragomir’s on how the COVID-19 pandemic impacted the situation of migrants in EU detention centers.

The interviews with government officials, NGOs, border protection forces and detained asylum seekers from nine countries conducted by the students revealed a worrying picture of how the conditions of some of the most vulnerable people in Europe worsened during the coronavirus crisis.

Despite calls from EU institutions and international bodies to treat migrants humanely during the pandemic, many member states introduced stricter conditions and prolonged detentions in overcrowded facilities.

The piece reports that with the pandemic, living conditions and the treatment of migrants in detention centers deteriorated, even in countries that were not previously known for treating detainees badly.

“This article is another strong example of how academia can contribute to journalism production,” Dragomir said, adding that all of the students made important contributions to the article.

Link:
POLITICO Article: ‘Locked up like animals’ — immigrant detention centers in the time of the coronavirus
Category:
News