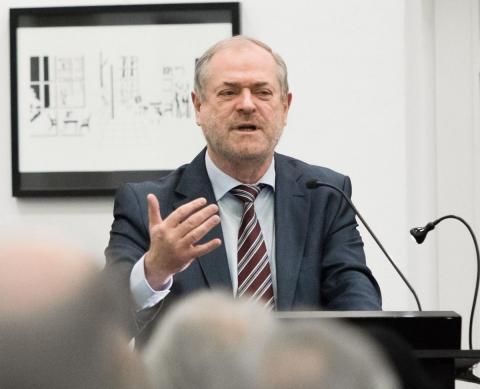 Klaus F. Zimmerman George Soros Visiting Chair and President of the Global Labor Organization has a global record of excellence in research, teaching, policy advice, engagement in the diffusion of knowledge to society and academic networking. He was also building up, leading and restructuring large academic institutions. RePEc ranks him among the top 0.2% on its world list of over 50,000 economists.

Strongly committed to evidence-based policymaking, he regularly writes in leading international media and advise governments and institutions. He has been teaching "Global Labor Economics" at CEU's School of Public Policy as a George Soros Visiting Chair during the 2019 Spring term.

Why the School of Public Policy at CEU? What does your stay contribute in terms of research, interaction with SPP faculty and students?

I am working on European integration and global migration issues, and have published substantially on the European Union East enlargement and its consequences for the wellbeing of European nations. I have visited Budapest a number of times in my life to interact with Hungarian academic institutions. The CEU has over time become a lighthouse institution for the academic transformation of Eastern Europe. CEU's academic staff and students are so professional, international, multi-ethnic and multidisciplinary; it is a pleasure to interact and learn. My research benefits from the various discussions I had during the visit - with long-term effects. It therefore has been both a pleasure and a great honor the have been the GSVC.

You have authored a vast body of academic articles, books, edited volumes. Which finding was the most intriguing one, perhaps changing the way we see some policy problems?

Unlike what the public and policymakers often think, labor migration is a coming and going. Scientist have called this cirular migration. While the inflow is properly noticed, the outflow is often overlooked. If policymakers wish to stop the inflow through regulations or walls, the outcome may be the opposite of what they intended: Workers stay longer, temporary migrants become even permanent, they bring family, and those unwilling to integrate pass these attitudes to their kids who remain disintegrated in the country. At the end there are more than less migrants and their composition is more troublesome. The better solution is free (and legal) labor mobility, where societies, companies and workers are adjusting according to general rules.

What policy issues are you working on now, and how do they relate to the European project?

Europe sees a rise in nationalism, avoids necessary reform policies and is afraid about foreigners and migration. People think that the world gets better if they ignore the consequences of demographic shifts, climate change and global conflict. This is a global trend, but Europe risks its well-build institutions which brought wealth, wellbeing and peace. Hence, I am writing about the benefits and conditions of well-designed reform policies, world-wide open labor mobility and a proper refugee policy. Europe will collapse if it fails to deal with those challenges.

You are one of the most prominent advocates of evidence based policy making. What are the necessary conditions for this to work? What is the role of universities in this?

For such a policy to work, it needs that policymakers are collaborating with scientists. Researchers have to be willing to address pressing societal issues, execute state-of-the-art research and communicate it properly. They have to provide where possible alternative options, so that politicians can optimize with respect to the opinions of their voters. Policymakers need to listen and be willing to give larger weight to long-term efficiency issues over short-term muddling-through concepts focussing primarily on redistribution policies. Universities and research centers are core in this process, and they can only function with acdemic freedom. If society attempts to control and command research, the price is loss in welfare and wellbeing.

You know that Lex-CEU effectively expelling CEU from Hungary. Is this a broader trend, and how should societies and academics respond to this?

Although in line with many developments in the world suggesting a decline in the acceptance of science in society, these Hungarian experiences are dramatic. They will have huge damaging long-term effects for the Hungarian economy and society, and possibly push the country out of the European Union. This is a divide between the intellectuals and the ordinary person, a divide between brain and heart. Scientists have to go out to convey their findings, but they also need to activate and motivate the hearts. It is important to work on a European identity, not only to show that Europe creates a better economy.

You have held several professorial positions, the founding director of a prominent research institute, the Institute for the Study of Labor, the president of Germany's largest think tank DIW, having significant academic and policy impact. From that experience, can you generalize some key lessons for young researchers, but also students, who aspire to have such an impact?

Start as an academic, not as a policy advisor. Publish articles in established respected research journals to create an academic reputation. This is your capital as a policy advisor afterwards. Do not become partisan, or you become a politician, and not the independent thinker needed. Wait for the time when the problems become so pressing so that your advice is need. This implies patience and the willingness to execute stand-by research. To be effective, seek the traditional and the social media, to achieve a global standing, and be ready to advise key policymakers at the local or national levels. Be willing to accept the huge administrative and psychological burden of directing large research institutions.

Prof. Klaus F. Zimmermann gives further insight into the topic of migration at an interview with HVG magazine. The article is in Hungarian here below.