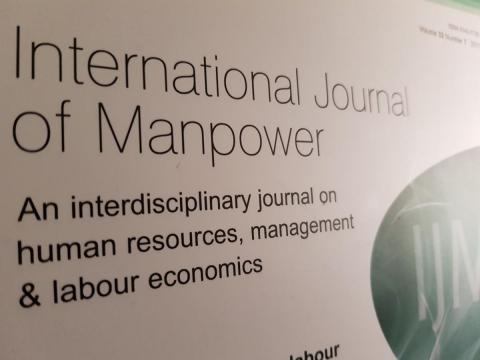 In a recent study published by the International Journal of Manpower SPP's Head Martin Kahanec and recent SPP doctoral graduate Magdalena Ulceluse (now at the University of Groningen) show how the effect of employment protection legislation (EPL) on self-employment differs between natives and immigrants.

These findings could mean that stricter EPL reduces employers' flexibility in adjusting to economic cycles and forces them to contract out work instead, an effect particularly affecting natives when it comes to regular employment and particularly strong for immigrants in the case of temporary employment.

The purpose of this paper is to investigate the effect of employment protection legislation (EPL) on self-employment in a comparative analysis between immigrants and natives. Specifically, it investigates whether, as a result of more stringent regulations, self-employment becomes a vehicle for better labour market integration for immigrants and natives, and for better matching between the supply and demand of labour and skills.

The authors use OECD indicators on the strictness of EPL, self-employment rates calculated for natives and immigrants from the EU Labour Force Survey and a range of control variables, in a longitudinal study covering 18 European countries over the period 1995–2013. The analysis employs a panel regression with random effects as the baseline model, with country and time fixed effects models serving for robustness checks.

The results indicate that EPL of regular contracts affects native self-employment positively, with some evidence of a negative effect for immigrants. On the other hand, EPL of temporary contracts positively affects immigrants’ self-employment. These results indicate that a stricter EPL crowds out incumbent native workers from the prime employment segment of regular contracts into self-employment, whereas a similar effect exists for immigrant workers in the segment of temporary contracts. This is consistent with the hypothesis of segmentation of labour market opportunities between insiders and outsiders, with implications for immigration, employment and entrepreneurship policies.
This is the first study to systematically study the effect of EPL on immigrant and native self-employment in a comparative framework. It elucidates to what extent self-employment serves as an alternative channel of labour market integration in response to less and more strict regulation of regular and temporary employment contracts. Distinguishing immigrant and native workers helps us understand how these effects may differ for outsiders and insiders in the labour market, as represented by the two groups.
Link:
Link to the article
Category:
News
Academic Area:
Migration
Inequality