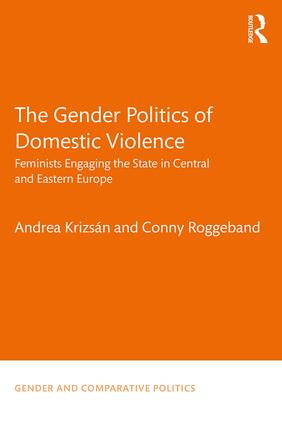 A new book by CPS Research Fellow and SPP Adjunct Faculty Andrea Krizsan, The Gender Politics of Domestic Violence. Feminist Engaging the State in Central and Eastern Europe , is published by Routledge.

Co-authors  Krizsán and Roggeband (University of Amsterdam) look into what explains the emergence of women’s rights friendly domestic violence policy reforms in some countries in the Central and Eastern European region and their absence in others. They do so by tracing policy developments in five countries - Bulgaria, Croatia, Hungary, Poland and Romania - across almost fifteen years of change, from the beginning of the 2000s, when domestic violence first emerged on the policy agenda of these countries until recent times. Authors look into contestation that takes place between women’s movements, states and actors opposing gender equality.  They point to  specific patterns of feminist engagement with states in which coalition-building between women’s organizations and establishing lasting alliances with critical state actors were fundamental for achieving gendered policy progress. They also demonstrate how discursive contexts shaped by democratization frames and opposition to gender equality, led to differences in the politicization of gender equality, making gender friendly reforms more feasible in some countries than others. The book focuses primarily on years of gender policy progress in countries of the the Central and Eastern European region. Yet the analysis also captures and provides avenues for understanding emergent patterns of democratic and gender policy backsliding increasingly present in Hungary, Croatia and Poland in most recent years.