The Changing International Economy of Oil and Gas 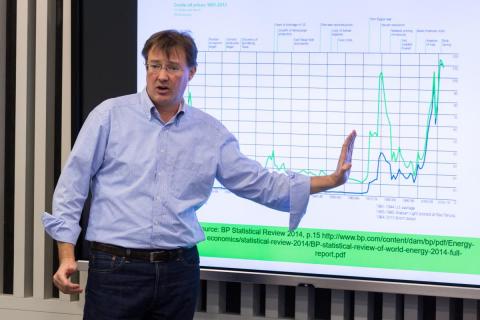 In the first university-wide seminar of the academic year, Karl Hall (Department of History, CEU) moderated a discussion with Nick Sitter (School of Public Policy, CEU), Svein S. Andersen (BI Norwegian Business School), and Andreas Goldthau (Royal Holloway, University of London) on the changing geopolitics of oil and gas on the global and European levels. CEU Provost and Pro-Rector Liviu Matei introduced the event as the first in a series of talks that promote "substantive discussion on topics that go beyond departmental and disciplinary boundaries."

Sitter emphasized that "energy is a matter of geopolitics," and has been for decades. He began the story when the British Empire switched its power source from coal to oil, a decision that Sitter said politicized oil markets. In the 1950s and 1960s, the oil trade was dominated by the "Seven Sisters." During the OPEC era from 1973 to 1986, Middle Eastern oil nations exerted political power – especially during the oil crises in the 1970s and 1980s. Following the end of the Cold War, the global economy enjoyed a period of increasing liberalism and prosperity as markets opened in the 1990s and 2000s. "But since around 2014, energy has been back on the geopolitical agenda," concluded Sitter.

Sitter attributes the rising political importance of energy to several factors: the rise and development of Russia and China; the increasing role of national oil companies; and the importance of shale oil and gas, particularly in the United States. "We've seen a shale oil revolution," commented Sitter. While conventional oil requires large upfront investments in exploration and drilling and has low marginal costs, shale oil costs little to find but has high marginal costs. It therefore acts as an alternative source of oil that is more responsive to rapid changes in demand, and represents a "fundamental change in the global market." At present price levels, its presence prevents oil-exporting nations like Saudi Arabia from influencing energy markets by cutting production as they've done in the past. 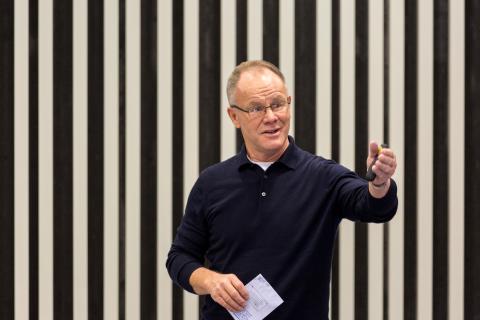 Andersen continued Sitter's story with a focus on the EU as an actor in the energy world. Taking a historical perspective, Andersen noted that oil-producing nations like Norway "thrive on international conflict and market failures," which lead to high oil prices. Policy making in the EU on energy issues has been reactive, he said. "The EU has struggled to reach consensus on energy policies," Andersen commented, "which is a reflection of dynamics within the EU."

Considering the beginnings of the EU, Andersen recalled that "energy was seen as the building block of integration." Members believed that a common energy policy would lead to integration in other areas. It has instead "become one of the most controversial areas" in part due to global issues beyond the EU's control. In the 1960s, Europe became increasingly dependent on oil from the Middle East, and a common EEC policy was "almost non-existent," outlined Andersen. During the oil crises of the 1970s, national governments competed with each other for limited resources through bilateral diplomatic missions to the Middle East.

From the 1980s on, there have been attempts by the EU to regulate an internal energy market as well as attempts to export liberal market values to neighboring countries like Russia. In the late 1980s and 1990s, the EU tried to reform the internal gas market. Norway, an external gas exporter, successfully introduced the internal market with the European Economic Area.

By the 2000s, Andersen continued, energy interests had diversified. Oil prices soared, triggering the search for alternative energy. The decade saw a "perfect storm": financial crises, reduced energy demand, and the shale oil boom. "Alternative energy always thought they would save the world through technological developments," said Andersen. "They didn't think that technological development would also happen in the oil and gas sectors – here is where shale oil and gas entered the picture."

Andersen imagines a future characterized by "long-term low prices and multiple suppliers." The development of the 2015 EU Energy Union, which responded to a pre-2010 perspective on the energy sector, "came too late as the landscape has changed completely," concluded Andersen. 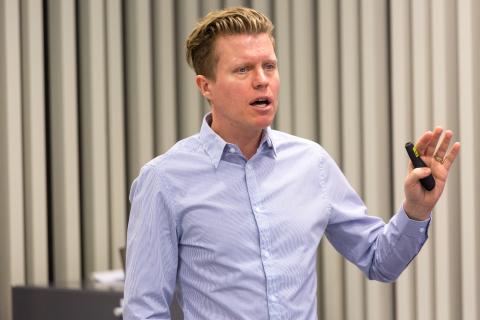 Using examples of the EU using each type of these four powers, Goldthau emphasized that the EU has shifted from a normative power in the 1990s to a market power or even a hard economic power today. One recent example of the EU acting as a market power is its selective treatment of "good" gas pipelines such as Nabucco or the TAP versus "bad" pipelines like the South Stream. This selection reflects an increasingly geopolitical reading of regulation, the EU's main toolbox to deal with the energy sector. Goldthau also cited an example of the EU acting as a hard economic power when it imposed energy sanctions against Russia and Iran.

"The energy sector has become a tool for geopolitical scheming by the EU," concluded Goldthau, "with the EU picking and choosing its role."