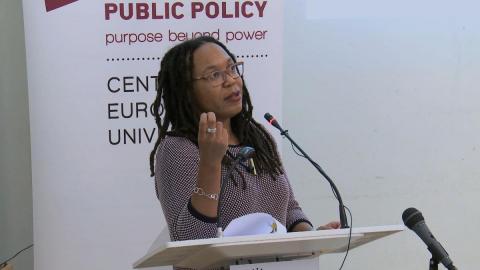 "Austerity has asymmetrical effects. It is racialized, gendered, and classed – always," said Akwugo Emejulu in a public lecture at CEU's School of Public Policy on November 22. Emejulu, who is senior lecturer and co-director of the Gender Justice Lab at the University of Edinburgh, shared the results of a two-year study that she and Leah Bassel, senior lecturer at the University of Leicester, conducted in 2011-14 to explore the impact that the 2008 economic crisis and resulting austerity measures have had on minority women and the third sector in Scotland, England, and France.

Emejulu described what has happened in Britain since 2008 as a "catastrophe" – especially for women of color. The effect of GBP £18 billion cuts to social welfare and a 27% reduction in local government budgets – and the speed with which these cuts and reductions have been made – has had an effect that is, according to Emejulu, "as dramatic as what happened in 1946 when the modern welfare state was established."

The austerity measures that have been introduced in France during the same period have been "very different." Instead of a "sweeping program of cuts," there has been a policy of fiscal consolidation through measures such as a freeze on government spending; a reduction in social welfare services through non-replacement of staff who leave; and the introduction of more stringent eligibility requirements for some benefits.

What happens to women of color during austerity is not new, said Emejulu, but "a sharpening and deepening of their already existing precarity." It is because of their "almost permanent precarity" that women of color's economic hardships are often ignored. Their situation is seen as "unremarkable." Emejulu went on to observe that the lack of scholarship about women of color reflects this attitude. 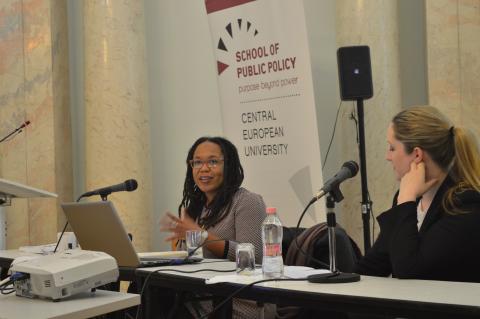 Emejulu noted that women of color are usually absent from policy discussions and that if they are consulted it is usually as an "afterthought." On those rare occasions when they do engage with women of color, policymakers "don't want to hear about poverty and economic insecurity," but instead focus on issues such as forced marriage and women as victims of violence. In the process, Emejulu said, they "misrepresent women of color's experience."

Emejulu said that activists also find it difficult to introduce race into discussions dominated by class. She quoted a black trade unionist in London who commented that even "people who are supposed to understand" aren't able to grasp "what true equality means and what oppression is."

Emejulu concluded her presentation by challenging the audience to seek ways to transform complicity with the racial contract to solidarity "and a new political imagination."