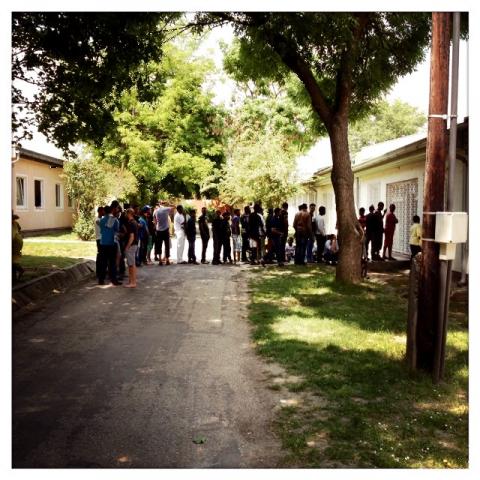 Attending the Global Policy Academy’s course on European migration policy, Aleppo Project fellow AlHakam Shaar led a discussion with his classmates and asylum seekers at the Bicske Reception Center, located about 40 kilometers outside of Budapest, Hungary. “The refugees at the center felt quite familiar to me,” said Shaar, a native of Aleppo, Syria.

Guided by a social worker, students learned about life at the reception center, which is one of five in Hungary. Meeting with a diverse group of refugees, students had a unique chance to see migration policy in action. “The course helped me to have a better idea of how we can help asylum seekers,” Shaar commented.

As an Arabic speaker, Shaar was able to connect with five refugees from Syria and Iraq in particular. Coming from diverse educational, religious, and geographic backgrounds, these refugees shared several general concerns about safety, integration, and their future. Many refugees entered Hungary on foot after walking through Macedonia and Serbia, where they felt very vulnerable on the road and in police stations and detention centers due to abuse by the police, bandits, and smugglers. Refugees at Bicske also felt like they were not provided the support and resources they needed, such as language classes, to integrate into Hungarian society. While many want to pursue higher education, they face an uncertain future as their refugee applications are processed over several months.

“Hearing from these refugees,” Shaar said, “I could understand their situation. I’ve had a number of friends and acquaintances from Syria who have gone through the asylum seeking process in other European countries.” Learning about migration policy from a legal perspective, Shaar explained, has given him a stronger grasp on the basic rights of asylum seekers in the EU.

The reception center visit also gave Shaar a great networking opportunity with volunteers from Migszol, a migrant solidarity group in Hungary. Shaar plans to join some of their future volunteering efforts. He also hopes that through Migszol, he can connect with more Aleppians in Hungary and collect more data for the Aleppo Project at the Center for Conflict, Negotiation and Recovery (CCNR).