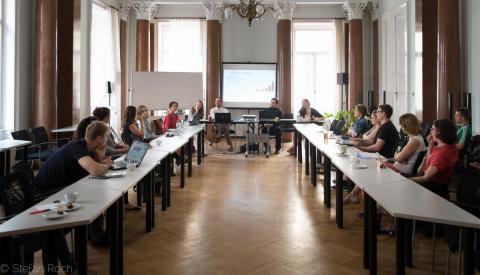 CEU participants in the 2015 Allianz Summer Academy organized a roundtable on June 1 to discuss their preliminary report entitled “Open Borders, Closed Minds:  EU Asylum Policy in Crisis.” The event attracted participants from the CEU community as well as Hungarian civil society. During the discussion of the report, the students raised a number of critical issues concerning the implementation of EU asylum policies as well as the domestic treatment of asylum seekers and the effects of current political developments in Hungary.

In the coming weeks, the team will work on integrating comments received during the roundtable. The final report will draw the connection between the state and development of EU asylum policies and the political situation in Hungary. It will provide targeted advice to policy practitioners and civil society on how fundamental rights of asylum seekers can be strengthened at the national and EU levels. The findings will be presented on August 1 at the Allianz Summer Academy in Kempfenhausen to participants from Princeton University, the University of Munich, Bocconi University, and Uppsala University.