Cycle of Poverty and Disease Can Be Broken, Paul Farmer Says at OSF-SPP Event 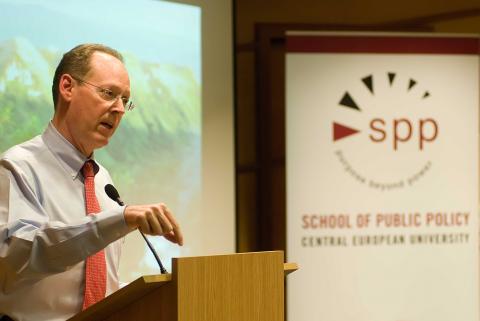 The cycle of poverty and disease can be broken through investment in public health systems, according to Dr. Paul Farmer, Harvard University professor and  United Nations Special Adviser for Community-Based Medicine and Lessons from Haiti, and founder of Partners In Health.

At a June 12 event at the Central European University (CEU), sponsored by the Open Society Foundations and CEU’s School of Public Policy, Farmer spoke from 25 years of experience in Haiti, Rwanda and other developing nations where he has built hospitals and helped generate astonishing improvements in public health.

The public lecture, entitled “Foreign Aid”: Five Emerging Myths, Ten Facts, Five Steps Forward, was held at the conclusion of a two-day event during which high-level policy makers, representatives of countries receiving official development assistance, bilateral and multilateral donors, NGO representatives and academics gathered to share the lessons they have learned, discuss challenges, and explore potential strategies on the strengthening of the accountability and transparency mechanisms of governments receiving development assistance for public health programs.

“Paul is the world’s foremost strategist for combating disease in situations of extreme poverty,” CEU Rector and President John Shattuck said in introducing Farmer. “He has a unique and revolutionary approach to development assistance. The world should pay attention.”

Farmer’s approach focuses on long-term funding and cooperation between non-governmental organizations and public institutions. This  “accompaniment” approach debunks several misconceptions about foreign aid and what it can do.

“It’s not true that foreign aid doesn’t work,” Farmer said. “It can have an impact if it’s invested in systems, with a long-term engagement among partners, in an egalitarian way.”

The approach has worked in Haiti, where the NGO that Farmer founded, Partners in Health, built a 300-bed teaching hospital in a rural area in just two years. The hospital, built entirely with private donations, is now a public health care facility owned by the local government where a new generation of medical professionals will be trained.

Farmer countered the perception that secondary and tertiary health care isn’t a priority or cost-effective in regions of extreme poverty. Health care must be looked at comprehensively, since poor countries struggle not only with infectious disease, but also with chronic illnesses and emergency care, just like in developed countries. Funding may be focused on one aspect of public health, such as HIV, but it can and should be extended to other care, and integrated even with housing and education, he said.

Critics of foreign aid often claim that governments are weak and corrupt and therefore must be circumvented or avoided when implementing programs. However, Farmer counters that it’s also true that we conflate poor and weak systems with corrupt systems. “If we don’t have a tax collection system in a country, for example, it’s possible to mistake weakness for corruption.”

He went on to argue that NGOs are not the only solution.  NGOs do important work, but partnerships with governments are essential, Farmer said.

Farmer concluded with an optimistic message about breaking the cycle of poverty and disease.

“Not only is it doable if we rethink aid and move toward this accompaniment model, but I would say it would cost more not to do it,” he said. “The idea of having a sustainable planet that’s peaceful and kindly without taking on the equity gap is hard to imagine. If we look at poverty reduction, we have reason to hope.”

For more information on the work of Dr. Paul Farmer please visit www.lessonsfromhaiti.org

A recording of the entire lecture is available here.